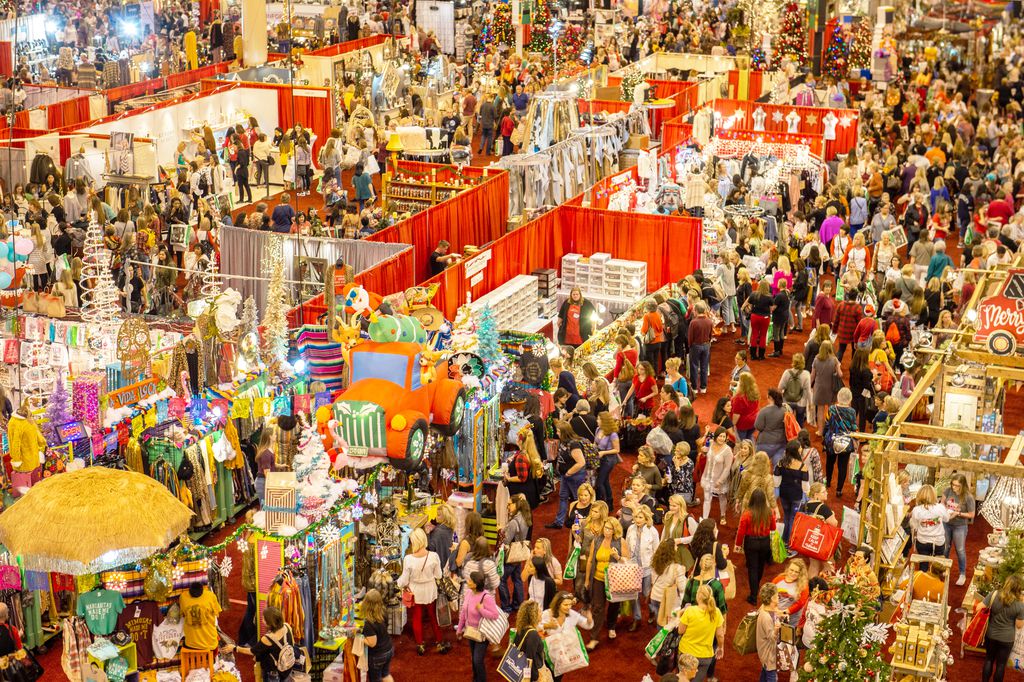 The Houston Ballet Nutcracker Market attracts more than 100,000 people during the annual four-day event in November.

Lots of Americans make plans in advance to shop long weekends with friends and family at annual treks.

Nope. This isn’t about Black Friday.

More than 12,000 people are expected to shop 230 merchants over the next three days at Dallas’ Chi Omega Christmas Market in the Centennial Hall at Fair Park.

The one that claims to be the big kahuna of Christmas markets is in Texas, too.

Last week, 108,000 people spent more than $20 million in four days with 260 merchants at the 39th Houston Ballet Nutcracker Market in the NRG Center.

There are holiday bazaars in U.S. cities from coast to coast. Shoppers say they find unique gifts, are supporting small businesses and are entertained by the experience. They also like that they’re giving back to a charity through the tickets they purchase to get in, for preview parties and funds raised from booth rentals and fees.

The flip side of this story is how entrepreneurs use these markets as retailing gets more competitive each holiday season and shoppers shift spending online.

Even Houston’s Nutcracker Market, which has a cult following, says it has felt the effects of online shopping in the past five years.

“Online shopping is so darn easy to do, sitting on the couch,” said Patsy Chapman, CEO of Houston’s huge market. “It’s a challenge, and retail is a tough business. We have to stay ahead of the trends. As soon as you identify something new, so do others.”

Every November and December, merchant entrepreneurs pack up big box trucks, in some cases multiple semi trailers, to head to Christmas markets sponsored by sororities, junior leagues and other charitable groups.

Amazon brags about its third-party Marketplace, in which some small businesses sell $1 million worth of goods per year, but Houston’s Nutcracker Market has vendors who reach that level over a long weekend. In addition to booth rent, the Houston market also collects 11% of sales. To maximize its earnings for the ballet, it wants highly productive merchants.

Nutcracker has many booths that sell in the six figures and some in seven figures, Chapman said. Booths that can’t sell much more than $20,000 won’t make the cut.

Each year, 400 applicants vie for 30 or so new booths that become available, said Chapman, who’s considered the dean of holiday markets. She’s in her 31st year with the Nutcracker, first as a volunteer. Now it’s a well-oiled machine operating with a full-time staff of six and many, many volunteers, she said.

“We can tell the internet has hurt some, but these shows are still worth it,” said Kim Raymond of Dallas, who has operated one of the largest booths at both Nutcracker and Chi Omega. Her Toys, Games and Gadgets interactive booth reaches many shoppers who wouldn’t venture into a toy store, she said.

Raymond finds unique suppliers, such as the maker of wine board games called Chardonnay Go and Shiraz on the Shelf. The creator, comedian Dena Blizzard, has a huge social media following and spent time at Raymond’s booth last week.

Raymond sold out of 400 ZAX rubber axes (with suction cups) in the first day and a half from her interactive display that benefitted from the current ax-throwing craze.

“It’s something I started doing to help with private school tuition and college and then you get addicted to it,” said Raymond ,who co-founded Dallas-based Marshmallow Fun Co., the original maker of the marshmallow shooters, with her husband Beaver Raymond.

Carrolton-based Sassy Cups has become a regular at the Nutcracker and sold more than 225,000 disposable and plastic reusable cups there last week, said owner Jennifer Tarbett. The business evolved at Christmas markets and now has a wholesale side supplying 400 retailers. She has booths at Chi Omega this weekend and in Austin.

Her Sassy cups come printed with initials, fun sayings and designs for every holiday. Last year, she licensed logos for 18 colleges, and those were a hit at shows early on. That led her to refocus her business away from custom printing of party invitations.

“The beauty of this event is that people come to buy, and where else can you have 225 merchants from Alaska to New York all in one place?” said Serena Cole, chair of the Chi Omega market steering committee. It takes 500 volunteers to put the Dallas show together, she said.

“And we’re seeing more brick-and-mortar retailers,” said Karen Gray, one of the Chi Omega co-chairs. Dallas retailers, The Impeccable Pig, Cousin Earl, ChristyM Boutique and Forget Me Not have booths at this year’s market.

It’s the first Christmas market for ChristyM owner Christy Mesec, who said many customers at her Snider Plaza shop are Chi Omegas, and they encouraged her to rent a booth this year. “It’s good exposure, lots of people are going and it’s a great cause,” she said.

A new generation of shoppers is being courted by these markets.

“We’re starting to attract a younger crowd,” Chapman said. But she said it’s not easy to cater to a generation that may not cook, entertain or decorate at the level of older generations.

A couple of years ago, the Chi Omega show made some changes to accommodate shoppers who want to shop late and make it a girls’ night out, Gray said. This year, the market has added live entertainment all day and hired a company to arrange it.

Evening classes have been added: a mixology class from Katy Trail Vodka on Thursday and water color painting from Maya + Kiwi on Friday.

“On Saturday, we have Santa here,” Gray said, “and that’s when we see the moms with the strollers.”